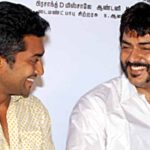 On one side July is going to be a most celebrated month as two movies from two bigwigs of Kollywood are hitting the screens but on the other side its going to be a battle between the fans of both the stars.
The month July is gong to witness the much awaited movies of the year Suriya’s 7am Arivu and Ajith’s Mankatha. It is known that Suriya’s 7am Arivu has completed its shoot and the team is busy with the post-production works and Computer Graphic works. Director Murugadoss is planning to release the film in the month of July.

Even Ajith’s 50th film Mankatha also wrapped up its final schedule in Hyderabad very recently and the unit has started the post-production work. Director Venkat Prabhu and producer Dhayanidhi Alagiri are in plans to bring the film on screens in July itself.

Buzz is that both the films are expected to release on a same date.

Will it be a double treat for fans and the film buffs or will it be a fight between the two most-wanted heroes of the industry?

Well let’s wait for the time to come until then stay tuned to Way2movies.com for more interesting updates of Tamil cinema!