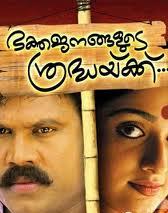 The weekend was the busiest in terms of new releases in the recent times. Four small films were released amidst harthal demanding ban on endosulphan. While East coast Vijayan’s musical love story ‘Mohabbath’ had  an average opening, Priyanandhanan’s foray into commercial films ‘Bhakthajanangalude Shraadhakku’ seems to be the movie which will get the best of the reviews. As per the First day first show reports, the movie which opened by the 6.30 shows in the evening is a good family movie with a good narrative structure.Kavya Madhavan is said to be in the best of her roles in recent times and the movie is expected to fare well at the Box Office.

Aascar Ravichandran’s ‘Lucky Jockers’ had the best of the opening with 60-80 percent collections on the opening day. This humorous entertainer telling a plot about a group of men planning to find out the costly diamond that is missing in a palace, is expected to do well in the initial weeks.