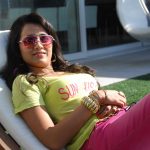 Actress Trisha says that two piece swim will not suit her. Though Trisha is a controversial person, she is able to remain in the top slot for the past 9 years. Recently there was news that Trisha is wearing a two piece swim suit in a Telugu film.

When asked about this, Trisha said, “Now I have considerably reduced my films compared to my early days. I am getting lots of commercial offers. But after acting in films like Abhiyum Naanum, Manmadhan Anbu and Vinnai Thaandi Varuvaaya, I have decided to act in the roles which have scope for acting.

There is nothing wrong in acting in commercial films. But there are lots of new faces now to act in them. I refused two such Tamil commercial films. In Telugu I am acting in the film titled Body Guard which has Venkatesh in the lead role. There is a lot of scope for acting in this film.
There are rumors that I am acting with two piece swim suit in this film. I was shocked on hearing this. I have been in the industry for the past nine years. I have never acted in swim suit even in one film so far. In future also I will not act with swim suits. This will not suit me.”