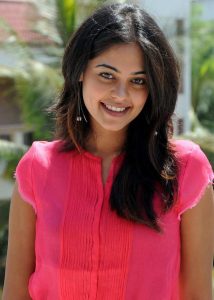 Many of the yester-year heroines haven’t dared to play the role of a sex-worker, but this is not the case with the present-day heroines. The actresses are expressing their interest in taking up such roles to prove their talent and acting skills.

Critics showered praises on Anushka for her role of ‘Amalapuram Saroja’ in Vedam. Now, actress Bindu Madhavi is following the formers foot-steps and has essayed the role of sex-worker in one of her forthcoming films Sega, the dubbed version of Tamil flick Veppam. Nani and Nithya Menon are playing the lead roles in the film.

Talking about her role in the film, Bindu Madhavi says, “I’m playing the role of a sex-worker in Sega but they aren’t any intimate or vulgar scenes in the film. An artist should have guts to take up such roles and I wanted to prove that am a genuine artiste. I feel happy to act in Anjana Ali Khan’s direction and Gautham Menon’s production venture.”