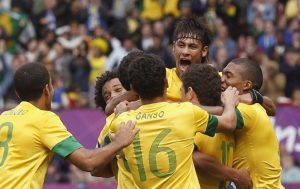 One match to go for Brazil. Only Mexico stands in the way of its first Olympic gold in football.

Brazil moved a step closer to winning the elusive medal by beating South Korea 3-0 on Tuesday and reaching the final of the men’s Olympic tournament for the first time in 24 years.

It will face Mexico, which defeated Japan 3-1 at Wembley to advance to its first Olympic final. “It’s been a long time since we made it to this final and that shows how hard it is to get here,” Brazil coach Mano Menezes said. “This group deserves a lot of credit and they know that we are closer to finally winning the gold.”

Brazil was the bronze-medalist in 2008 in Beijing but hadn’t reached the final since the 1988 Seoul Games, when a team led by Romario and Bebeto finished with the silver. Brazil also won the silver in the 1984 Los Angeles Games and got another bronze in the 1996 Atlanta Games.

Now only the gold will do for a team which came into the London Games with most of its country’s best players and as the top favorite. “The entire team had a huge effort to reach the final,” striker Leandro Damiao said. “We are happy to have made it to the final and we are here to win the gold medal. We are Brazil, we are here for the gold.”

But the Brazilians struggled early against South Korea at Old Trafford before taking control of the match after defensive midfielder Romulo opened the scoring with a low shot from inside the area following a pass by playmaker Oscar in the 38th minute.

Damiao scored twice in the 57th and 64th to seal the victory and become the tournament’s leading goal scorer with six goals, surpassing Senegal’s Moussa Konate. “We had difficulties in the beginning of the match but the goal came at the right moment and we were able to slowly regain control,” Menezes said. “What matters the most is that we got our fifth straight win and reached our goal to make it to the final.”

South Korea was making its first semifinal appearance at the Olympics. “It could have been better but we blew our early chances at the beginning of the game,” South Korea coach Hong Myung-bo said. “The players were tired but they could have worked a little bit harder. It was hard for us to recover after our previous matches but hopefully we will be in better shape to play Japan.”

South Korea eliminated host Britain on penalties in the quarterfinals.

Mexico’s previous best showing at the Olympics was at the 1968 Mexico City Games, when the team was beaten in the bronze-medal match 2-0 by Japan, also that nation’s best finish.

It got the win yesterday thanks to a swerving long-rage strike by Oribe Peralta in the 65th, breaking a deadlock after Japan opened the scoring with a shot by Yuki Otsu in the 12th and Marco Fabian headed in a corner for Mexico’s equaliser in the 31st. Javier Cortes scored the third goal deep in second-half injury time.

“That’s just it, we are 90 minutes away from history,” Mexico defender Carlos Salcido said. “That is the way we are looking at it.” Japan will now play South Korea to try to match the bronze medal from 1968 in Mexico City.

“We had a good start but then stopped moving,” Japan coach Takashi Sekizuka said. “Everyone is very disappointed. But we need to get over our emotion and prepare for the next game.”