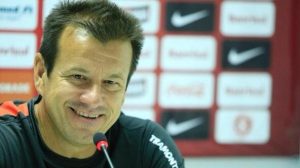 Lopes had been his assistant at Internacional during Dunga`s 10-month spell at the Porto Alegre club before it ended in October.

The 48-year-old, a member of Dunga`s back-room staff during his first spell in charge of the national team from 2006 to 2010, had been coaching at Galatasaray.

“We have sought a range of professionals from different parts of the country to work with us,” Dunga said in a statement released by Brazil`s football confederation Wednesday.

“We have brought in some World Cup winners to provide some experience, quality and champion DNA.”

Mauro Silva, who also played in Brazil`s 1994 World Cup triumph, will work as an assistant alongside Lopes during Brazil`s next two friendly matches against Colombia and Ecuador in September.

Dunga said he planned to bring in other experienced coaches to join his managerial staff on a rotational basis.

The 50-year-old was appointed Brazil`s manager Tuesday, replacing Luiz Felipe Scolari, who resigned after the team`s failure to reach the World Cup final as hosts and pre-tournament favourites.

His Selecao return was said to have come at the behest of his friend and former national teammate Gilmar Rinaldi, who was last week appointed Brazil`s new technical director.