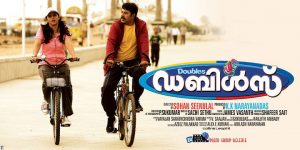 ‘Doubles’ is a great opportunity lost due to poor scripting and equally poor direction. The thread that they had in hand could have been developed into a good plot and the cast could have been used to make a thoroughly enjoyable movie. But as of now, it’s real intolerable stuff. ‘Doubles’ is the story of twins Giri (Mammootty) and Gauri (Nadiya Moithu). Giri and Gauri are the children of parents who got killed in an accident, especially due to lack of timely help and rescue. Hence they run an accident rescue service, with help from a gang of youngsters, their faithful aides (Saiju Kurup, Anoop Chandran and Bijukuttan). Giri remains unmarried, for the sake of his sister. Gauri was engaged to be married to Michele (Suresh), who is the son of Pierre (Y.G.Mahendran), who had brought up Giri and Gauri after their parents had died. But with Michele getting caught by the police in a black money case, Giri goes against him and cancels the engagement. Gauri is always with her brother, but we sense that she likes Michele still. The story takes a turn (Does it?!) with the entry of Saira Banu (Tapasi), a girl whom Giri and Gauri save from an accident. There are people who are out to finish off Saira. Things happen in a rather mysterious way and Giri and Gauri are forced to let Saira stay with them. But then, things take a new turn and Giri and Gauri quarrel and part ways. From here the plot develops. The problem with ‘Doubles’ is that it’s all based on a flimsy plot. The twins thread could have been developed into a better plot, with characterization being handled better. The way the plot develops is real unimpressive. There are lots of problems as regards the development of the plot, the characterization, the performance, the dialogues, the technical aspects and the film thus happens to be very much unimpressive. Performances The film presents a casting coup, but the performances of the key players leave much to be desired. Mammootty and Nadiya Moithu, who play the twins, seem to be not that involved with their characters. Their performances lack something vital. Tapasi looks good, but her performance is not up to the mark. The script perhaps affects the performance aspect because the key players don’t get much scope for emoting. Suresh is good as Michele while Kannada actor Avinash is good, but he could have been better had the dialogues and dubbing been better. Y.G.Mahendran is good. One wonders why so many artists- Nadiya Moithu, Tapasi, Y.G.Mahendran, Suresh and Avinash- have been brought in when they had no room for performance. The characters that had been created for them could have been done by any other artist from Malayalam. Technical aspects The technical aspects too are not up to the mark. Editing could have been slicker and the cinematography, especially the lighting, could have been better. Music ‘Subrahmanyapuram’ fame James Vasanthan fails miserably with the songs, which are far from being impressive. Script Sachi and Sethu, who had shown promise with ‘Chocolate’ and ‘Robinhood’, have failed to do justice to the subject at hand. Their script is simple unimpressive. The dialogues too don’t make any impact and this affects the totality of the movie, adversely. The comedy part too doesn’t work out with the film. Direction Debutant director Sohan Seenulal staggers with a weak script to deliver a film that could have been much much better, given the subject at hand and the impressive array of artists at his disposable. His direction needs to evolve and improve. Better luck next time, Sohan. Overall verdict- Average, Poor scripting, bad direction