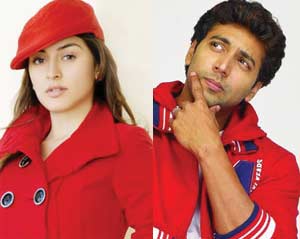 Engeyum Kaadhal one of the much awaited romantic films of the season is all set to hit the screens on May 6th, 2011. The film got postponed quite a number of times due to World Cup and Elections.

Engeyum Kaadhal features Jayam Ravi and Hansika Motwani in the lead roles while Raju Sundaram, Suman, Marion Arnaud and Aurélien Chevallier play prominent roles in the film. Engeyum Kaadhal story revolves around a girl living in France and falls in love with a boy from India. Sun Pictures has already started with the promotions on Sunday night and a two hour special program was telecasted on Sun TV where the cast and main crew of the film took part. Engeyum Kaadhal has been awarded with U certificate from the Censor Board Officials very recently.

Prabhu Deva has directed this romantic entertainer. Music by Harris Jayraj has already topped the chartbusters and was also awarded as the Best Selling album. Sun Productions has acquired the theatrical rights of this breezy romantic candyfloss love story.