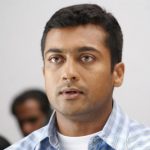 Surya’s Ezham Arivu shooting has started in and around chennai. Ezham Arivu directed by A.R Murugadoss features Surya and Shruthi Hassan in lead roles. Ezham Arivu is being produced by Udhayanidhi Stalin of Red Giant movies while the music for the film has been scored by Harris Jayaraj.
Surya sports a new new look for the film by coloring his hair light brown.

Ace cameraman Ravi K Chandran using Jimmy Jip, shot a very interesting scene near the Adyar flyover. Surya comes to Aavin Milk Parlour situated near the flyover riding a horse with Shruthi Hassan on the backside and buys her an ice cream from the parlour!