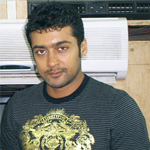 A.R. Murugadoss’s next project with Suriya and Shruti Haasan, Ezhaam Arivu (which means seventh sense), is said to be a never-seen-before story, loosely based on Leonardo Di Caprico’s yet-to-release Hollywood flick Inception.
Inception is a sci-fi action thriller which revolves around a skilled thief who is an expert in the dangerous art of extraction, stealing valuable secrets from deep within the subconscious during the dream state, when the mind is at its most vulnerable.

Ezhaam Arivu is produced by Udhayanidhi Stalin under his Red Giants Production banner. Ravi K. Chandran handles the camera and Harris Jayaraj will be the music director. Shruti Haasan will reportedly sing all her songs in the film. The latest buzz is that the film will have only three characters: Suriya, Shruti Haasan and a new villain from Hollywood.