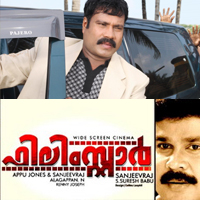 Dileep who is riding in the success of his last three films which all turned out into big hits, will have a release this month in the movie ‘Filmstar’. The flick which was in the production for quite some time will also have Kalabhavan Mani in an equally important role. The final song of the movie was shoot a couple of weeks ago and with that the entire production came to an end. The movie will have Dileep as a scriptwriter who writes stories about realistic happenings in his village and society. ‘Filmstar’ will take on ‘Mohabbath’, a musical by East Coast Vijayan.The movie will have Meera Jasmine and Munna in the lead roles supported by six songs set to music by S Balakrishnan