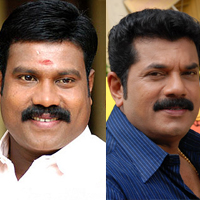 Mukesh and Kalabhavan Mani would play the lead roles in a film titled ‘Football Friends’ that would be directed by Jijesh Vennala.

The film would have a screenplay by veteran writer Dennis Joseph.

Besides these actors, eleven new heroes, seven villains and four heroines would make their debut through this film.

‘Football Friends’ would be produced by Winter Wake Productions.