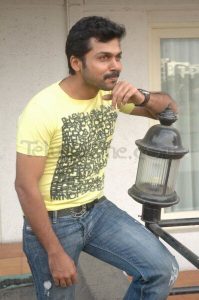 Last year, Karthi met his real life heroine Ranjini and tied the knot. This year, one of his forthcoming films will have four beautiful ladies standing in front of the camera with him. We are talking about the yet-to-be-titled movie, being directed by Suraaj.

Besides Anushka, who is the main heroine, there are three other popular actresses and they are Nikitha Thukral, Meghna and Sanusha. “All the four have reasonable screen space with Karthi in this commercial entertainer,” sources say.

Remember Meghna had already worked with Karthi in ‘Siruthai’, while this is first time for Anushka, Nikitha (of ‘Saroja’ fame) and Sanusha (of ‘Renigunta’ fame) to share the screen space with the hot and happening hero of Kollywood.

“The film is taking shape fast and Suraaj has decided to ensure that it hits the screens this summer. It will be filled with action, romance, comedy and sentiments. The movie may be dubbed and released in Telugu simultaneously,” say sources.