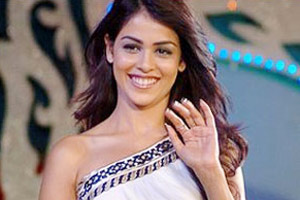 When things are going well for you, everything, even things that you had done long back seem to align themselves in your favour. That seems to be the case with Genelia right now. She seems to be going through one of the best phases of her life at the moment. Her wedding to long time beau Ritesh Deshmukh happened just a few weeks back and then there was the film Tere Naal Love Ho Gaya, which had her along side her husband, releasing on Feb 24. It is now gaining momentum at the box office.

If the marriage was the cake and the movie was the icing, then there is also a cherry on top in the form of an announcement by the Limca Book of World Records. Genelia has entered the Limca Book for the unique feat of featuring in superhits of 4 different languages in the same year. The year is 2008 and the films were Santhosh Subramaniam in Tamil, Ready in Telugu (that became Uthamaputhiran in Tamil), Satya In Love in Kannada and Jaane Tu Ya Jaane Na in Hindi. Now, it looks like this feat was waiting all these years to make an appearance during this high phase of Genelia’s life.