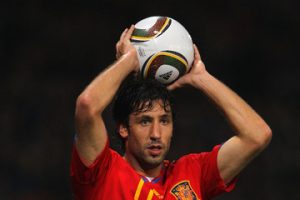 Capdevila who marshalled the left back position for La Roja, was a prominent member of the sides that won both the World Cup in 2010 and the European Championship in 2008.

He has played over 400 games with 36 goals in the Spanish La Liga for big guns like Espanyol, Athletico Madrid, Deportivo, and Villarreal.

The 36-year-old who played for La Liga Club Espanyol last season, said he was excited to join the club after speaking to team co-owner and Bollywood actor John Abraham.

“At this stage, after winning everything which is there to win, a new challenge was needed. After speaking to John Abraham about the way he is passionately looking to promote football in India and the project of NorthEast United FC, it excited me to take up the challenge.

“India is a huge country and it should be a privilege for me to be a small part in popularising this global game here and working with the young talented footballers of North East India,” Capdevila stated in a release.

Abraham also expressed his excitement in roping in the World Cup winner.

“We are confident that his achievements in the game and his presence in our team will motivate young Indian players and his inputs will help us build a strong in the future.

“Speaking with him when he was in Brazil, I got a sense of his passion for the game and specially his excitement about joining our team was motivational and unparalleled. We look forward to his arrival in India,” Abraham said.

Lajong FC Managing Director and NorthEast United FC co-owner, Larsing Sawyan said, “This is the best thing that has happened to NorthEast United FC. A player of Capdevilla’s calibre will definitely add impetus to our ambitions in the upcoming ISL.

“Football fans from the North East are already familiar with him and we believe the excitement of the ISL in North East has already reached a high level. We welcome Joan Capdevilla to Northeast United FC and hope he can help us bring success both on and off the field.”

Supported by the All India Football Federation, ISL is co-promoted by IMG-Reliance and Star India and is tentatively scheduled to be held from September 19 to November 30.