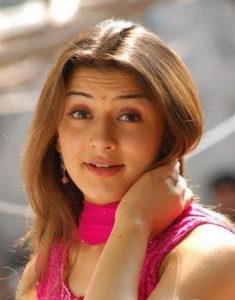 She is the new entrant to Kollywood diva list.

And the surprise candidate is none other than Hansika who has bagged the most talked about projects of 2011.

And the big news is that she has piped Trisha and Shruti Haasan to be the heroine in director Rajesh’s Nanbenda opposite Udhayanidhi Stalin who is making his screen debut.

She has signed on the dotted line for a whopping salary, and will start work from March.

Young, optimistic and full of energy, Hansika is all smiles as she says: “I really liked the script and have full faith in Rajesh who makes simple love stories laced with plenty of humour and good songs”.

Nanbenda will have Harris Jayaraj as music director and the film will start rolling from February in Chennai and Pondicherry.