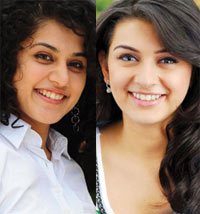 There is an undercurrent of tension between two beautiful sexy kittens Hansika Motwani and Tapsee Pannu.

Both are debuting in Kollywood shortly, after doing Telugu films.

At the moment the two are on top of the wish list of ‘A’ grade heroes, who are looking for newer heroines from Mumbai.

The top heroes feel that their pairing with the current crop of top Mumbai heroines Tamannaah, Genelia and Sameera Reddy is on the last leg. They are looking at a change, which many feel will take place in 2011.

Says a veteran artist manager: “Tamil commercial cinema is always on the lookout for new fair skinned Mumbai girls to replace existing lot of heroines. The days of Jyothika and Simran who ruled for years are over as the new breed of younger stars are pushing the older ones. Now industry believes that 2011 new models will be Hansika and Tapsee as they are locking horns over the same films”

Hansika the younger of the two will debut with Prabhu Deva’s Engeyum Kathal opposite Jayam Ravi. The film is scheduled to release for Pongal 2011.

Meanwhile Tapsee’s long in the making debut film in Tamil, Vetrimaran directed Aadukalam with Dhanush, is also scheduled to release for Pongal 2011.

Hansika seems to have the edge as of now, as she has a more impressive list of releases with big stars like Velayudham with Vijay, Maapillai opposite Dhanush and Engeyum Kathal with Jayam Ravi.

Tapsee backers believe that after Aaadukalam where she is paired opposite Dhanush, she will become a big star. She has also a powerful role in Kannan directed Vanthaan Vendraan, opposite Jiiva. In fact Tapsee will sign new films only after the release of Aadukalam.

The buzz in Kolywood is that both the girls are eyeing the same roles and sparks are flying. Both have been penciled for a big hero film that will start in 2011. The director of the film is largely responsible for giving a break to a Mumbai girl who was languishing in Telugu before she struck gold in Tamil.

Any which way you look the turf battle for supremacy between Hansika and Tapsee is going to ignite as their films get released.