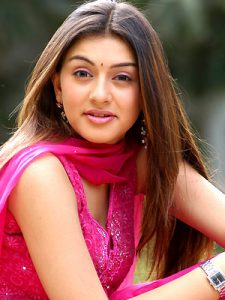 2011 seems to be busy and big year for actress Hansika. The actress has signed up 5 films at a time leaving one and all in surprise. Hansika has three Kollywood and a couple of Tollywood projects in her kitty.

Hansika took a brief gap after her Seetaramula Kalyanam Lankalo with Nitin failed at the Box-Office. She later accepted Kandireega film with hero Ram, which is presently undershoot. The actress is also part of Siddharth, Dil Raju’s tentatively tiled flick O My Friend.

On the other hand, the actress is on high demand in Kollywood, where she gave her nod for three big banner projects at a time, apart from her debut film. Hansika will test her luck in Kollywood this Friday with her debut flick Mapillai with Dhanush as her co-star.

Hansika informs, “Apart from the three projects of Kollywood, My two films in Telugu are also under the big banners. Bellamkonda Suresh is producing Kandireega under Sri Sai Ganesh Productions Pvt Ltd., and Dil Raju is producing O My Friend under Sri Venkateswara Creations banner. My characters in both these films would appeal the audience. So, all in all, I’ve 6 films in 2011 year alone.”