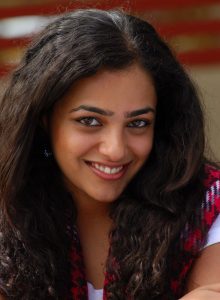 Popular South Indian heroine Nithya Menen celebrates her birthday on April 8th. She has been a big hit among Kerala audience after the release of Urumi. The song ‘chimmi chimmi minni thilangana vaaroli kannanukk’ stays in the mind of every Malayalee. The role of Chirakkal Bala in Urumi opposite Prabhu Deva has made Nithya very popular. This role in Urumi helped Nithya to win the hearts of millions of Malayalees around the world. Nithya’s character in Urumi lingers longer than other characters in our minds.

Nithya, an artist par excellence who can sing well besides acting, always wanted to be behind the camera, directing and shooting her own films. She graduated in Journalism from Manipal Institute of Communication.

Aakasha Gopuram, an offbeat film directed by K.P. Kumaran, marked her debut in films. She was paired opposite none other than Mohanlal. The film failed to click but Nithya’s acting skills were noticed. Nithya also acted in a few Kannada films but has yet to make her mark in Sandalwood.

Nithya is currently a super hit among Telugu audiences after her super hit romantic comedy Ala Modalaindi. Offers are pouring in for this Bengaluru gal after the super success of Ala Modalaindi. She is currently busy shooting for the Telugu film Ishq opposite Nithin. Apart from Ala Modalaindi, her other film 180 opposite Siddarth was also well-received, making her one of the top heroines in Telugu films. This sincere hardcore artist is not even coming home for birthday. Nithya came home on 4th April for a short break and took her parents to watch her film Urumi, then had to get back for the shooting of Ishq, so she will not celebrate her birthday at home, but on the sets of Ishq.

Nithya will mark her entry into Tamil films with the release of Veppam later this month.