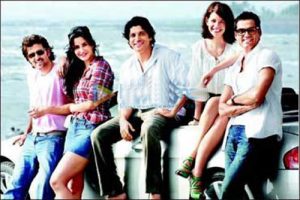 Hrithik Roshan, Farhan Akhtar and Abhay Deol, who feature in the forthcoming film “Zindagi Na Milegi Dobara”, are set to sing the song “Senorita” live at the music of the movie.

For the first time, the three actors will be seen singing live and jamming with the audiences, Saturday, at a mall, here. Music directors Shankar-Ehsaan-Loy will also be present there.

“We are planning an innovative event on Saturday, where all three boys will sing live,” Ritesh Sidhwani, the producer of the film said in a statement.

In the film too, the song “Senorita” has been crooned by the three actors.

Releasing July 15, “Zindagi Na Milegi Dobara” is about three friends who take off for a bachelor trip and how their lives undergo a major change after that. The film, directed by Zoya Akhtar, also stars Katrina Kaif and Kalki Koechlin.