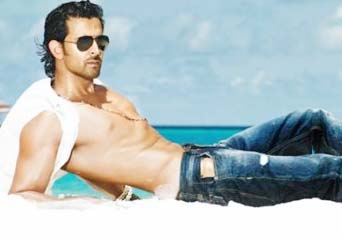 Bollywood hunk Hrithik Roshan hurt his finger on the sets of Karan Johar’s upcoming Bollywood film Agneepath. The film is the remake of blockbuster hit of yester years by the same name, Agneepath original had legendary Amitabh Bachchan as the male lead.

The new is that for a scene in movie, Hrithik was required to break a coconut and after giving many retakes, suddenly someone noticed that Hrithik has hurt his finger. As soon they realized that his finger is cut and is bleeding profusely they gave him first aid.

However ask Karan Johar and he is very happy about the small accident, because he believes if someone gets injured or bleeds in a film, it becomes a hit.