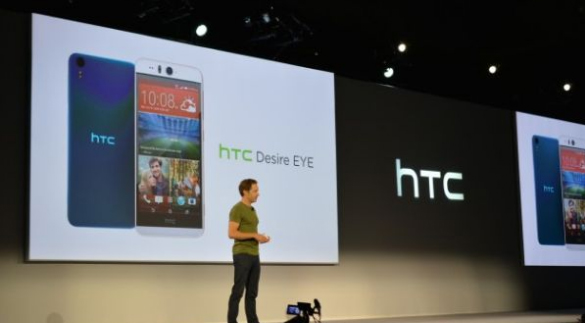 After Samsung and Microsoft, HTC has now introduced its selfie-focused smartphone. Named the HTC Desire Eye, the new smartphone is claimed to include one of the best front-facing cameras.

It has a dual-colour, waterproof unibody design with a 5.2-inch full HD display. Beating under the hood is a Qualcomm Snapdragon 801 processor.

According to the company, The HTC Eye Experience takes mobile imaging software to a new level. The HTC Eye Experience’s face tracking keeps you framed at all times. Also up to four people in the same room can also be tracked comfortably, with each face cropped and positioned on the screen for maximum clarity.

Its new Split Capture function combines simultaneous photos and videos taken on the front and back cameras into one split-screen image or video, creating a new selfie experience. Crop-Me-In places you at the heart of the action by cropping you from the image or video taken with the front-facing camera and positioning it within the scene captured by the main camera.

Voice Selfie makes it easier for you to take selfies. Simply “say cheese” as soon as you’ve struck the perfect pose or trigger the video recording with “action” or “rolling” commands.

Additions to the HTC Desire 820 are also included in the HTC Eye Experience such as face fusion, the feature that allows you to merge your face with that of a friend or celebrity for a completely original look and Live Makeup, where you can set the desired level of skin smoothing and preview the effect in real-time before the image is captured.

The option of screen sharing in the HTC Desire Eye brings desktop functionality to smartphone-based video chat.
The HTC Desire Eye will be rolled out across EMEA, Asia and the US from October.