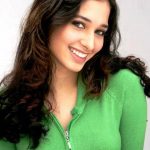 Responding to the rumours that she has charged a whopping Rs 1.25 crores to perform a liplock scene with Jr. NTR in her upcoming Telugu film Oosaravelli, directed by talented director Surender Reddy, ravishing actress Tamannaah said that she will never liplock, stating that she is uncomfortable with kissing scenes.

The actress revealed that the first line in her contract say that she would never wear a bikini or act in a liplock scene. “No matter how much money is offered, I will never do it,” she said. The actress also lashed out at the media for spreading such rumours.

Oosaravelli is produced by B.V.N.S. Prasad under the banner of Sri Venkateswara Cine Chitra. Devi Sri Prasad is scoring its music. The shooting will commence soon.