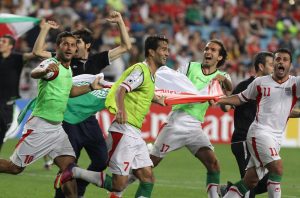 Ashkan Dejagah is confident Iran can end its goal-drought by beating Bosnia on Wednesday to reach the World Cup last 16.

Iran is third in Group ‘F’ with one point after a goalless draw with Nigeria and the heartbreak of its 1-0 defeat to Argentina when Lionel Messi scored in added time.

In Salvador, the Iranians must beat Bosnia, which is already out, while hoping Nigeria fails to pick up a point against Argentina in Porto Alegre.

Salvador’s Arena Fonte Nova has seen 17 goals in three games after the Netherlands 5-1 romp over Spain, Germany’s 4-0 hammering of Portugal and France’s 5-2 rout of the Swiss.

Iran can now do with scoring a few of its own at the same venue.

If it wins and Nigeria loses, both sides will finish with four points leaving goal difference to decide who goes through to the last 16 clash in Brasilia next Monday against the Group ‘E’ winner.

Fulham’s Dejagah says his side must bounce back from the disappointment of its defeat against Argentina with a win.

“We still have a chance to go through and who would have thought our World Cup would last longer than England and Spain,” Dejagah said.

“We had such a bad feeling after the match against Argentina because of the way it ended.

“We tried to make it tough for them and with a little bit of luck we would have won this game or even got a draw.

“I hope we have showed the world that Iran can play football.”

The Bosnians are on their way home after losing their opener 2-1 to Argentina and then 1-0 to Nigeria on Saturday, but Safet Susic’s side wants to bow out with heads high.

The defeat ended Bosnia’s first World Cup campaign in the group stages, but striker Edin Dzeko wants to sign off in style.

Dzeko was left fuming after the defeat to Nigeria when he was denied an early goal by the linesman’s flag, but replays showed the player was clearly onside.

The Bosnians claimed New Zealand referee Peter O’Leary then missed a foul on Emir Spahic in the build-up to Peter Odemwingie’s 29th-minute winner.

“We should have won the game, but the referee was shameful,” said Manchester City’s Dzeko.

“We know that we are not going into the next round, but we will try to do our best in the next game,” pledged Dzeko.