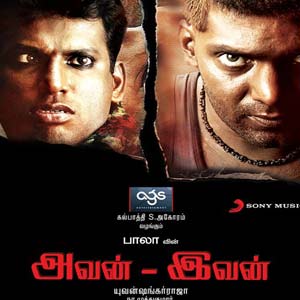 Generally when a big film gets ready for its release most of the producers would lock the rights of the film on priority basis. Kollywood’s Big Production houses like Red Giant Movies, Sun Pictures and Cloud Nine Movies are named as masters in promoting a film. They always make a right strategy which ultimately results success at the box office.

The production house AGS Entertainments which produced Avan Ivan are still on wait as nothing has been decided on the rights of the film. But the satellite rights were recently sold to Sun TV by the producers of AGS. The launch of the audio is going to take place today at The Residency Towers in Chennai and the film is also planned for a theatrical release mostly in a month.

But the producers have sold the Telugu rights to Vishal’s brother Vikram Krishna and Shreya Reddy. By keeping in mind the fanfare of  Vishal and Arya in Andhra Pradesh Vishal’s brother has made this decision as they can get good collections at the box office. They have earlier released each and every film of Vishal in Telugu which are accepted by the Telugu audiences.