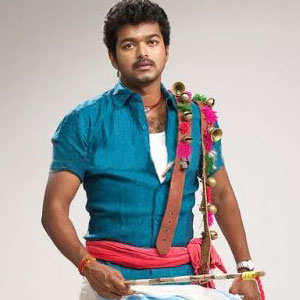 Velayudham, one of the much awaited audio of the season is now confirmed for its release on July 15th, 2011. Earlier it was planned for a grand release in the month of May but now it has been pushed back to July 15.

Sony Music has snapped the audio rights of Velayudham for a huge amount. The album comprises of five songs and Music director Vijay Anthony has composed peppy and dancing numbers for Velayudham as per the taste of Vijay and his fans. It is expected that AIADMK Supremo Jayalalitha is going to grace the audio launch event on the invitation of Vijay’s father S.A Chandra Shekar. Vijay is essaying the role of a Milkman Vetrivel while Hansika plays the role of a village girl Vaidehi. Genelia sports as a journalist in the film and Saranya Mohan plays Vijay’s sister.

Velayudham has brighter chances of getting its theatrical release on Vijay’s birthday (June 22) as things are moving as per the schedule. Velayudham is produced by Aascar Ravichandran of Aascar Films.

The technical team includes Priyan for cinematography, Mohan for Editing and Vijay Anthony for music.