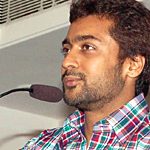 “My market value has increased after ‘Ayan’ and it is my responsibility to give good films. ‘Singam’ is one such movie that would satisfy all sections of the audience,” says Suriya.
The actor, who is eagerly expecting the film’s release this weekend, says, “Singam is my silver jubilee film. It is a commercial cocktail, meant for family viewing. It has action, sentiment and good comedy, thanks to director Hari.”

“In 13 years of my career so far, I have seen many ups and downs,” the actor says and adds: “This is my third film with Hari (after Aaru and Vel) and my second with Sun Pictures (after Ayan).”

“When we decided to do a cop story, we were conscious that it should not have any traces of ‘Kaakha Kaakha’ or ‘Samy’. In a way, ‘Singam’ is about a kind-hearted khaki man who loves his culture, tradition and people around him. But a series of events forces him to take a violent path.”

2 thoughts on “It’s my responsibility: Suriya”