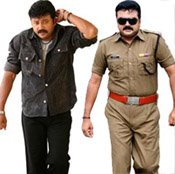 Actor Jayaram has the best of the times this year with a hat trick of hits, up around his sleeve. The actor who had rarely excelled in action roles will be seen once again as a police officer in the new movie titled as ”City Police Commissioner Antony Thalassery’ .To be directed by newcomer Lenny P Thomas, this movie will be scripted by Krishna Poojappura.

The movie which is planned as a hilarious comic entertainer, will be on sets in a couple of months.