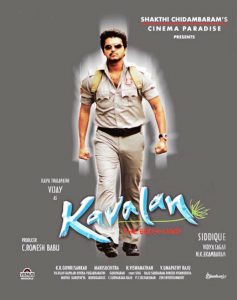 His eagerly awaited Siddique directed Kaavalan has been cleared by the regional censor board in Chennai with a clean ‘U’ certificate.

It clearly means that Ekaveera Creations and producer C Romesh Babu will release the film worldwide on January 14, for Pongal.

Theatre booking and other distribution arrangements has started from today.

Kaavalan  has Vijay, Asin, Mitra Kurian, KK and Vadivelu. The Siddique directed film is a remake of the director’s Malayalam film Bodyguard and has music by Vidyasagar.