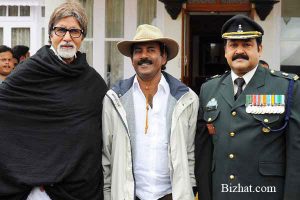 After Keertichakra and Kurukshetra, Mohanlal and Major Ravi have come out with another popular episode from the life and times of Major Mahadevan in their latest much hyped Kandahar. The film is partly inspired from the controversial Kandahar hijack that took India by storm in 1999.

Scripted and directed by Army officer turned filmmaker Major Ravi, Kandahar is mainly about the emotional conflicts in the minds of a few characters. Of course there are moments when every Indian would feel proud about being born in this great land, but the shaky script, ordinary action sequences and a faulty climax lets the film down.

The entire first half is about the build up to the hijack with an idealistic teacher named Lokanath Sharma (Amitabh Bachchan) supporting his son Soorya (Ganesh Venkitaraman), to become a brave Army commando. There is a parallel track happening where a Muslim woman (played by KPAC Lalitha) painfully realizes that her only son has fallen into the charm of some terrorist outfits.

Both the stories move on parallel lines as Soorya trains in the Indian Military Academy at Dehradoon, while the other guy gets trained to become a ‘Jihadi terrorist’ in Afghanistan!! The story takes some time before the hijack happens, almost all on a sudden. A few terrorists get into an Air India aircraft and forces the hapless pilots to fly the plane with full of passengers on board, to Kandahar in Afghanistan. They demand the release of three dreaded terrorists in order to free those in the plane. Major Mahadevan and his team are now designated to take on the terrorists.

The absence of a genuine script is evident as the main aspects in the film gets too little time compared to the melodramatic events which are there aplenty. The climax of the film is its biggest weakness and sticks out like a sore thumb. The way Mohanlal and co enters the hijacked aircraft and overcomes the well trained terrorists is done in a very amateur manner. The visuals are generally fine, but the highlight of the film perhaps could be the performances of the lead actors.

Mohanlal is absolutely fantastic as the mild mannered Major Mahadevan. The actor expresses in a subtle way, which is in fact a trademark nature of his character as well. Amitabh Bachchan character speaks only in Hindi and is obviously doing the film so that there will be some combination shots with Mohanlal.

The scenes between the two are highly contrived. Still Bachchan shines and shows why he is regarded as an evergreen icon. Ganesh Venketram has the right looks, but his character doesn’t connect well with the viewers. Major Ravi’s performance as a tough training officer is impressive.

The rest of the cast including Sumalatha, Ragini Dwivedi and Ananya among others have nothing much to perform in their limited roles. The music by Shamir Tandon is pretty fine.

A note of advice for all of you who haven’t watched Kandahar, it is not a conventional action film. But the film has some sincere and enduring moments, which can shake you up in a positive way. Watch it for Mohanlal and Amitabh Bachchan, both of whom are known for their acting prowess and you won’t be disappointed.