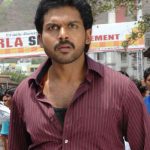 The ‘Siruthai’ is ready to roar after a brief break.Buzz is that Karthi Sivakumar’s next venture has been titled as ‘Saguni’. The film will be helmed by Sankar Dayal, a former associate to Ezhil and SD Saba. To be produced by Dream Warriors, ‘Saguni’ is said to be a political satire.

GV Prakash will score the film’s music while editing will be handled by Antony. The cinematography will be done by PG. Muthiya, art by Rajeevan and PRO by Johnson.

The shooting of ‘Saguni’ Shoot is expected to start in the mid of April.