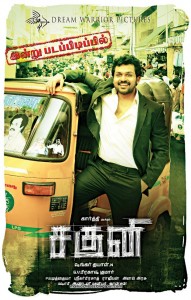 Karthi Sivakumar, who has proved his mettle not just in Kollywood but also at Tollywood Box-Office by scoring a hattrick, is yet again hitting the big-screens with one more dubbed film.

Karthi’s Tamil film titled as Saguni is being dubbed in Telugu as Sakuni. The movie has political backdrop and the young actor is doing a distinct role from his previous films. Prannetha of Bava fame is playing the leading lady alongside Karthi in the film. Karthi’s previous outings were produced by Gnanavel Raja on the banner of Studio Green and Sakuni is also being released by the same banner.

The film-makers have decided to release both Telugu and Tamil versions simultaneously. Meanwhile, the logo and the trailers of Sakuni will be unveiled on 2nd September on a grand scale.