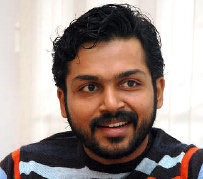 Karthi who has come up with Siruthai during Pongal has not started his next film yet. Though he is coming across many subjects but none of the directors are coming up with an impressing script.

Karthi recently heard more than six scripts narrated by prospective directors. According to the snoopy sources it is heard that, Karthi may do a film with director Suraj, as he narrated an incredible masala story blended with lots of action, comedy and sentiments. After listening to the script, Karthi felt it is a real prospective plot and is in plans to start the shoot of this film immediately.

Karthi with this film is turning as a smart businessman as he will be producing the film under his home production banner Studio Green, run by his cousin Gnanavel Raja. He will be finishing the films shoot in just 100 days and is planning for August release.