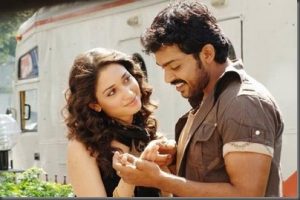 Lingusamy’s ‘Paiyaa’ has successfully completed 100 days of run and is still going strong. The youthful road film released on April 2 is one of the few block busters of the year.

‘Paiyaa’ is the first road movie in Tamil deftly handled by Lingusamy. His fast paced narration and the excellent music from Yuvan Shankara Raja made the film shift to top gear at the box office from the second week itself. Yuvan’s songs are still topping the music charts even after 9 weeks.

Karthik scored a hat trick and Tamanna got her first real hit in ‘Paiyaa’. The chemistry between the lead actors is well noticed by all and they are now considered a popular Jodi preferred by film makers. Cinematography by Madhi and editing by Antony are big strengths of Lingusamy in this film.