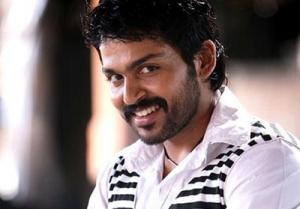 For all those fans of the young Tamil star Karthy, who had converted his films like’ Paiyya’, ‘Paruthiveeran’ and ‘Njan Mahaan allai’ into big hits in Kerala theatres, this is a big news. Unconfirmed reports suggests that the actor may make a debut into Malayalam with the movie ‘ Athoru Mazhakkaalam’ directed by Murukesh. The movie makers  who are planning the flick with  Sai Kumar  as  the hero, is trying in to rope in Kaarthy to do an important role in the project. Scripted by Ratheesh Sukumaran, ‘Athoru Mazhakkalam’ will tell the story of Shivashankaran Nair, a former cook of Saddam Hussein, whose life takes a turn after the President�s death. Meanwhile, some others youngsters  including Sandeep, an associate to Major Ravi  is also planning to bring in  Karthy for his debut filmn.