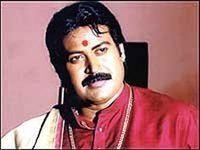 After two years from his divorce from star actor Urvashy, popular supporting star Manoj K Jayan is reported to have tied the knot again, on Thursday. This time Manoj has opted for a women outside media and celebrity circle and has selected Asha, a native of Varkala as his wife. The low-key marriage function is reported to have taken place in a relative’s house at Thrissur, the last Thursday. According to sources, none from the film circle was invited for the function which was attended by a few relatives of the bride and groom.