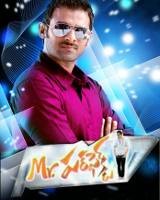 Prabhas, Kajal Agarwal, Tapsee starrer Mr.Perfect is gearing up for its release on 22nd April. In this regard, producer Dil Raju is promoting the film on full-swing. He held press meet and launched the movie website, which was attended by director Dasarath, screenplay writer Hari and others.

Speaking on the event Dil Raju said, “Mr.Perfect is hitting the screens on 22nd April. Meanwhile, we are releasing the website www.themoviemrperfect.com. The movie is a youthful family entertainer that would be loved by all categories of the audience. The entire team of Mr.Perfect has put in their best efforts for the outcome. Prabhas will be seen in an entirely new angle while Tapsee has dubbed her own voice in an impressive way. Screenplay by Hari, dialogues by Abburi Ravi, fights by Peter Haynes have all come out extremely well.

Director Dasarath said, “Mr.Perfect would surely become this summer’s special film and the entire credit goes to Prabhas and Dil Raju. Prabhas, Kajal and Tapsee have given their best performances and infact, the entire unit has worked hard. I take this opportunity to thank the whole unit of Mr.Perfect.”