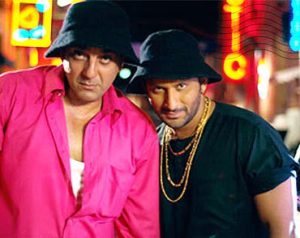 ”Is ‘Munnabhai’ franchise loosing out to ‘Golmaal’?’ This is the question which is making the rounds of the industry, especially with the third instalment of ‘Munnabhai’ series taking forever to kick start. After the success of ‘Munnabhai MBBS’ (2003) and super-success of ‘Lage Raho Munnabhai’ (2006), one would have expected the third in the series to begin soon as well. However that hasn’t happened even as the team of ‘Golmaal’ has announced that ‘Golmaal 4’ is definitely on the anvil.

“Are you kidding me”, pronto comes a reaction from a senior trade expert when questioned on ‘Munnabhai’ v/s ‘Golmaal’ comparison, “On the face value this question itself is irrelevant since the fact remains that when it comes to garnering respect in the industry, ‘Munnabhai’ is notches ahead of ‘Golmaal’.”

However there are two more facts that cannot be ignored. First and foremost, ‘Golmaal’ has taken the lead and released its third instalment last Diwali. Secondly, ‘Golmaal 3’ has done a far greater business than ‘Lage Raho Munnabhai’ which means that it has found widespread acceptance, if not similar kind of respect, across the country.

“Yes, in that sense ‘Golmaal’ has capitalised most on it’s brand recall value”, says an industry observer, “Also, this franchise is rolling out products in quick time which means money generation is faster.”

Now that’s not something that the team of ‘Munnabhai’ won’t be worrying about because as famously conveyed by in ‘3 Idiots’, Rajkumar Hirani and Vidhu Vinod Chopra are pretty much following their own saying of – ‘Run after excellence and success will definitely follow’.

“Exactly. Who would have thought that ‘3 Idiots’ would cross 200 crores just in India”, another box office expert nods his head in agreement, “Rest assured, whenever ‘Munnabhai 3’ will release, it will break all existing records. The kind of respect that Raju commands, not just amongst audience but also trade and industry, is unparalleled.”

Well, we look forward to that as well. May the ‘best franchise’ win or rather, both of them actually win!