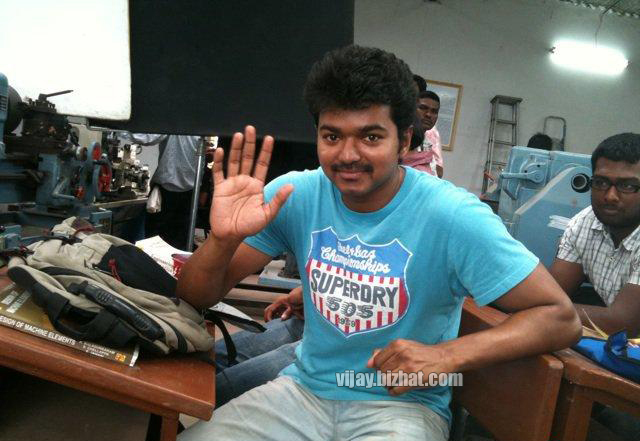 After shooting in Coimbatore, Ooty, Andaman and Amsterdam, the cast and crew of ‘Nanban’, led by ‘captain of the ship’ Shankar, are now camping in Chennai, picturising some important scenes.The team has recently canned important class room scenes at Bharath Engineering College on the lead cast Vijay, Jeeva and Srikanth.

Shankar has shot a song on Vijay and Ileana very recently where Vijay dressed up as a warrior and Ileana looked just like an angel in her dress in a location which looked like a citadel. It is said that the song is to be a dream song between Vijay and Ileana. Director Shankar has said that almost 60 percent of the shoot has been completed including the climax of the film. The outdoor sequences of the film which are most complex and complicated have also been wrapped up.

Surprisingly, the scenes that have completed the shoot are now in editing process and even the dubbing work is also going on simultaneously. Nanban is currently left with one long schedule which will start during the next week and with the film gets wrapped up

So, in all probabilities Nanban will get ready for Diwali release and it will be a great treat for Vijay fans as two of his films Velayudham and Nanban will be hitting the screens within a gap of 2 months.