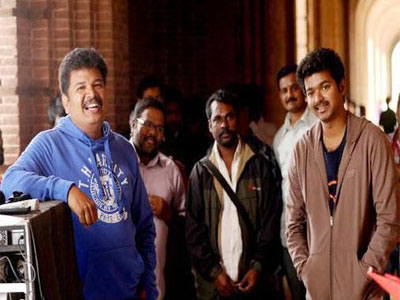 This might be the first time, director Shankar is wrapping up a film in a record time. The director is pressurized to complete the film faster as all the lead stars in his film are the most happening heroes of Kollywood and they have already signed up new projects.

It is well known that Shankar has kept Rajinikanth and Aishwarya Rai wait for about two years for completing Enthiran but that is not the case with Nanban. Shankar is rushing with the shoot of the film and the final schedule has started today, which will go on for a month. Shankar is working round the clock for completing the project in one month. Jeeva will be joining the shooting from today onwards and is excited about it.

This is the first remake film for Shankar and he is taking utmost care in making the film match to the Tamil audiences. The expectations are running high on the film as Nanban is shaping under Shankar’s direction, music by Harris Jayraj and off course the lead cast Vijay, Jeeva, Srikanth and Ileana.