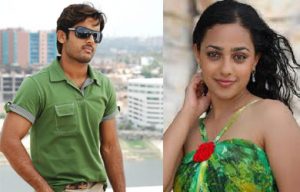 Nithin’s next flick Ishq in the direction of Vikram Kumar of 13B fame has reached its final leg of filming. The entire shooting of the film is expected to be wrapped up by the end of September. The last schedule will begin from 1st September where three songs in the movie will be canned.

Ishq is touted as a youthful romantic entertainer and major part of the film was shot in Hyderabad while the song will be canned in foreign locales soon. Nithin will be seen romancing Nithya Menon in the film. Ishq is being produced by M Vikram Goud on Shresta Media Pvt. Ltd while Multidimension Entertainments banner will present the film. Anand Shankar is composing the music and PC Sreeram is handling the cinematography for the film.