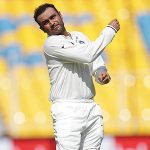 Morkel will take the new ball on his home ground with the world’s top-ranked bowler Dale Steyn in the first test starting at Centurion on Thursday.

“Sehwag is very dangerous when he goes on the charge up front, he can be very destructive against the new ball. I’m looking forward to the contest and the first five overs with the new ball will be vital because that’s when you still get good bounce,” Morkel told a news conference.

“If we can strike early with the new ball and get their middle order in quickly, then maybe we can bowl India out cheaply. It’s obvious you don’t want Sehwag to get a flying start and Gautam Gambhir was ranked the number one batsman in the world not that long ago.”

The weather around Centurion is still overcast after a wet weekend which should help the pace bowlers and South Africa batsman Ashwell Prince said he would relish the challenge.

“The weather forecast isn’t great and as long as there is rain about, there will be a lot of moisture about and I’ll expect the pitch to do a bit, with movement off the seam. But when the sun comes out, it is always a good track to bat on,” he said.

The left-hander was out of favour the last time South Africa played a test at Centurion, the drawn first match against England last December. But he averages 67 at the venue and has scored three of his 11 centuries there, each time when his side were in trouble.

“I want to make contributions when the going is tough, but you’re not always going to perform in those sort of conditions. But it’s more important for the team to take 20 wickets than the batsmen to fill their boots. It’s important that the conditions support the bowlers too,” Prince said.

The Indian batsmen have a valuable ally in adapting to the conditions in coach Gary Kirsten, a former South Africa opening batsman.

Captain and opening batsman Graeme Smith batted without discomfort in the nets on Tuesday and looks set to play despite fracturing his hand in that game.

“Having Graeme back is such a big boost, he always leads from the front with the manner he plays. The way he plays, he sets the tone, he’s aggressive from the start,” Prince said.