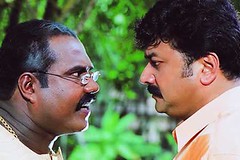 Divakaran(Jayaram), son of martyr Karunakaran is acknowledged by one and all. Though he believes in Communist ideologies and follows his father’s footstep he is well respected by other political parties also. This made the party to choose Divakaran as the MLA candidate. Without any trouble or false game he won the election comfortably.

MLA Divakaran was poignant about some of his party tactics. He expressed it and firmly opposed the move to stage strikes involving students. This provoked the party leaders and become the filth in their eyes. He started fighting against the party misdeeds and soon he become alone.