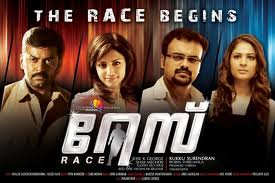 Race is directed by Kukku Surendran under the banner of Penta Vision and features Kunchacko Boban and Mamta Mohandas in leading roles.

There is a good buzz around the film after the release of Traffic since the movie subject is also based on time.

The story shows how a family’s life changes within 24 hours.

In Race, Kuchacko Boban is doing the role of Dr. Aby John and Mamtha Mohandas appears as his wife Niya.

Others in the cast include Indrajith, Gowri Munjal, Jagathy Sreekumar, Baby Ankitha and Geetha Vijayan.