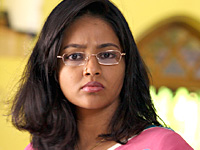 After she was dragged into the sleazy Swami sex scandal in March last year, popular South Indian actress Ranjitha was seen only once on the big screen! It was in ace Mani Ratnam’s mega movie Raavanan. Remember, the makers of Raavanan initially decided to remove and re-shoot her portion in the film, but eventually retained her scenes?

Anyway, after Raavanan, Ranjitha is now making her second appearance on the big screen with a Malayalam movie titled Puthumughangal, which is set to release soon. Sources say that Puthumughangal was supposed to hit screens last year, but got delayed due to Ranjitha’s sex scandal and consequent delay in completing her portions.

This film is jointly directed by Dawn Alex and Biju and produced by Salavuddin. The story is penned by Prakash Payyoly. Pradeep Kavunthara has written the screenplay and dialogues. Lyrics are by Vayalar Saratchandra Varma and Ramesh Kavil. Music is by Syam Dharman. Also in the cast are Thushar, Sarassi, Ameera, Silsila, Salimkumar, Harisree Asokan, Lalu Alex and Githa.