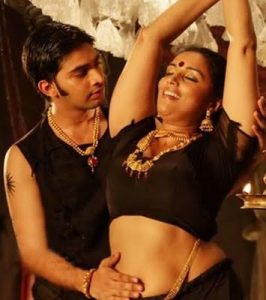 Menaka Sureshkumar produced Revathy Kalaamandhir’s TK Rajeevkumar directed Rathinirvedam is a super hit. The film a remake of Padmarajan-Bharathan 1978 classic by the same name has turned out to be gold 33 years after it was remade by Sureshkumar.

2011 Rathinirvedam which has Shwetha Menon playing the iconic Rathi Chechi done so convincingly by Jayabharathi, was made on a cost of approximately Rs 1.55 Cr. The television rights of the film was sold before release for Rs 1.50 Cr, overseas, India domestic and DVD/CD rights went for another Rs 50 lakhs. On the day of release (June 16) the film was profitable!

Rathinirvedam released on June 16, 2011 in 70 screens and took an extraordinary opening, on the strength of its provocative posters. The audiences rushed to the theatres and were a bit let down as there was no titillation scenes.

Still the film collected a whopping Rs 1.15 Cr as distributors share from 70 screens in its first week. The film expected to make a total share of approximately Rs 2.50 Cr during its theatrical run.

The trade is amazed that Rathinirvedam producer could collect Rs 2 Cr (from various rights) + First week theatrical share Rs 1.15 Cr. Total = Rs 3.15 Cr in a week’s time, truly incredible. It clearly means that
Rathinirvedam (2011) is a film that turned 100 % profitable for its producer in the shortest number of days from its release!