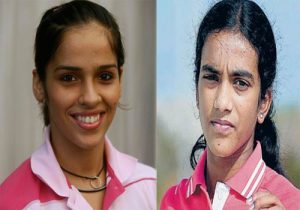 However, India’s campaign was over in both the men’s singles and men’s doubles events.

As expected, world No. 8 Saina had an easy outing against compatriot P C Thulasi, whom she beat 21-18 21-15 in a 42-minute battle, while eighth-seeded Sindhu took just 31 minutes to overcome Thailand’s Nichaon Jindapon 21-13 21-7.

The opening game saw some fine exchange of shots between the two Indians with Thulasi giving a good fight to her more
experienced and celebrated compatriot.

Though Saina took a 3-0 lead, Thulasi was quick to make it 3-3. Then it was neck and neck battle till 15-15 before the Olympic bronze-medallist shuttler upped the ante and used all her experience to steal the first game.

In the second game, Thulasi completely ran out of steam even as a dominating Saina, seeded sixth, kept on widening the gap to eventually close the door on her lesser known opponent.

Saina will clash with Eriko Hirose of Japan in the last eight stage of the competition.

For Sindhu, it was a cake walk today as she bagged a total of 42 points as compared to just 20 won by her rival.

The only time the scores were tied in the opening game was at 1-1. Thereafter, it was the world no. 10 Indian all the way.

Sindhu first opened up a 4-1 lead before extending it to finally wrap it up easily.

In the second game, however, the Thai shuttler posed some competition to the Indian but the fight lasted only till the seventh point. At 7-7, Sindhu broke off, reeling 14 straight points to seal it 21-7.

She will next take on Carolina Marin of Spain.

Meanwhile, world no. 77 B Sai Praneeth fought hard before going down 15-21 21-8 19-21 to sixth seed Chinese Zhengming Wang in a match that lasted an hour.

In the men’s doubles, it was curtains for the two remaining Indian pairs.

While Alwin Francis and Arun Vishnu lost 18-21 9-21 to third seeded combo from Taipei, Lee Sheng Mua and Tsai Chia
Hsin in round two, Pranaav Jerry Chopra and Akshay Dewalkar went down 13-21 19-21 to Korea’s Sung Hyun Ko and Baek Choel Shin to bow out of the tournament.