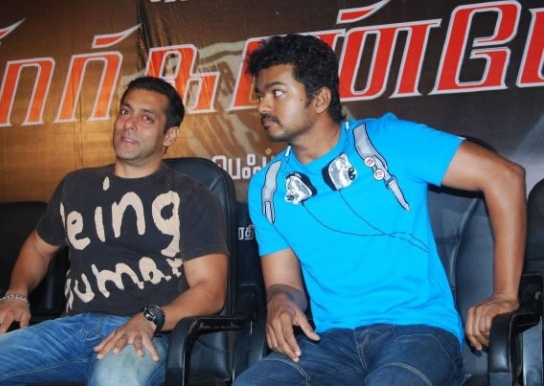 Bollywood star Salman Khan was in Chennai yesterday for the audio launch of Markandeyan starring Sabareesh, son of FEFSI Vijayan, who is the favorite action choreographer of the Salman. The launch took place at PVR Cinemas in Amijikarai in the evening.

Salman Khan and Ilayathalapathy Vijay have jointly released the film’s audio cassettes and CDs. Shriya Saran and the entire cast and crew of the film has graced the event. FEFSI Vijayan the well-liked stunt choreographer and one of the most threatening villain has earned popularity beyond Tamil films as he is quite known in Tollywood and Bollywood too. Sabareesh would be playing an out-and-out action hero in the film, with Vijayan by his side to train him to perfection in action.

On speaking at the launch Salman has wished Sabareesh all success for career..

Let’s wish Vijayan and his son Sabareesh a happy outing with Markandeyan!