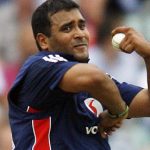 The England selectors named the 30-man preliminary squad for the ICC Cricket World Cup 2011 which will be held in Bangladesh, India and Sri Lanka from February 19 – April 2.

The squad – which will be halved by January 19 – includes all of those players named in the ODI squad for the series against Australia as well as eight members of the England Lions squad set to tour the West Indies next year. Stuart Broad (Nottinghamshire), who has been ruled out of the current tour of Australia due to an abdominal injury, is included and is joined in the squad by Test squad members Alastair Cook (Essex), Steven Finn (Middlesex) and Matt Prior (Sussex).

England National Selector, Geoff Miller, said: “We have selected a squad of players with a strong track record in limited overs cricket either for England or in the domestic game.

“Recent series have shown we have made progress in one-day cricket and we will be looking to continue this form during next year’s World Cup and challenge for another global title.

“Steven Finn and Chris Tremlett continue to impress with their development after strong performances domestically and with the England team at international level.

“Samit Patel has also been included in this preliminary squad and – along with every other player named – will be required to meet individual fitness criteria before the squad is finalised. There is still some time to pass before the final squad is selected so all 30 players have sufficient time to press for selection.”

England has been drawn in a group alongside Bangladesh, India, Ireland, Netherlands, South Africa and West Indies. The team will play two warm-up games against Canada and Pakistan before beginning their World Cup campaign on February 22 against Netherlands in Nagpur, India.