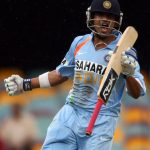 Gautam Gambhir today termed his match-winning century against New Zealand in the second ODI here as “special” as it was his maiden ton as India captain.
Standing in for regular skipper Mahendra Singh Dhoni in the first two ODIs of the series, Gambhir led by example and smashed an unbeaten 116-ball 138 to helped India register a convincing eight-wicket win and take a 2-0 lead in the five-match rubber.

“It was important. Getting a century as captain is special, and winning the game was more special,” he said after the match.